Put down your buckets of red paint – no animals were harmed in the creation of this post.

So I was mowing the lawn yesterday and I spotted this big red thing crawling across the grass. I had never seen anything like this before and wanted to know what it was. It looked like a wasp with no wings to me, so I naturally avoided touching it. So I used my daughter’s bug catching net to scoop it up then took a couple pictures for identification. 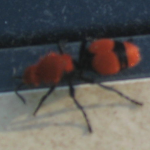 Roughly the actual size of it…

I searched Google for “red and black wingless wasp” and quickly found pictures that matched mine. This appears to be a Red Velvet Ant, commonly called a Cow Killer. That’s Dasymutilla occidentalis for you entomologists out there. The name is derived from the painful sting of the female, shown above, which is said to be so painful it could kill a cow. Only the females can sting and only the males can fly and both squeak/squeal when they are trapped. I was standing upright and had it pinned down with a stick and could hear it squealing loud and clear.

This species seeks out the underground nests of other stinging insects, namely bumblebees, and lays eggs that eventually eat the host larvae. What does this mean for me? I am likely to see more of them as we have a ton of bumblebees around. I let it go because I didn’t know what it was but with two little girls, one who refuses to wear shoes, I wish I had gotten rid of it.

The Taste of M&M's
The Bear in My House