TortoiseSVN routinely scares the crap out of me. I have my headphones on, I’m in the zone, I’m checking in changes, BEEEEEEEEAAAUUUUWWWWW!

By default, when you install TortoiseSVN it is set to play sounds any time error, warning, or notice event occurs. This is pretty bad and, as I mentioned already, quite startling. For whatever reason, instead of just putting an option into the application where you can change them directly you have to go to the windows sounds dialog to shut them off: 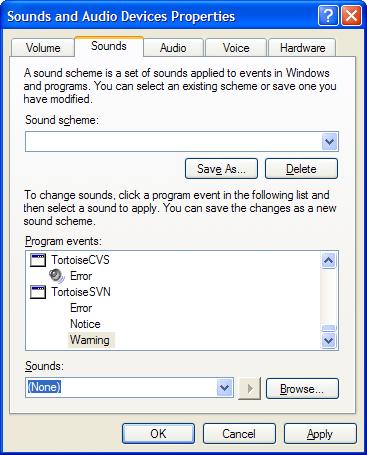 This is along the same lines as stealing my focus. Applications should not play sounds by default unless the user wants or expects them to. For example, I’d expect a music player to make some sounds but I never expect my file repository browser to do so.

If you write applications, random and sudden sounds are generally bad and undesired. There are some exceptions, however they are rare.

Rebuttal: We're not "resources"
The Sound of Brilliance