Over the years interns, junior engineers, aspiring programmers, and CS students have asked me what they can do to get better. I usually recommend some books that will help shift their thinking to the next level and try to direct them towards topics that interest them, such as GoF if they aspire to be an architect. There are a number of books I usually recommend, such as Effective Java. I was thinking about this question a bit this morning during my commute and concluded that there is a higher level to this answer than what I have been providing and it is industry agnostic. Learn to juggle.

I’ve found over the years that as my life and career has progressed that I have more of a need to be able to juggle many different aspects of my life, without forgetting or dropping any of them. There are a few distinctions when juggling. You can juggle small objects, large objects, or a combination of the two. Small objects are the light weight ones that are fairly easy to hold, catch, and throw and are thus not extremely important in contributing towards long term goals. Large objects are heavy, bowling ball like objects, that are very important to one or more of your long term goals. The importance of the object to long term goals is always going to be directly proportional to the size of the object. Considering this, the smallest object will always be the least important while the largest object will always be the most important.

When juggling there is always a threshold before things start hitting the ground. This threshold will differ from person to person and will vary depending on the type and number of objects being juggled. In addition, this threshold can be changed and will typically not require the number of objects in the air to be taken into account so much as the total weight of the objects. For example, if my threshold is 20 and I have 20 objects all valued at 1 then I am at my threshold. However, if I have only two objects, one valued at 20 and one valued at 1, I am over my threshold and something must give.

It is important to note here that there will always be some objects that are, in themselves, over our personal thresholds. These are items that we will likely be able to achieve, given time, but that we will have to drop all other things and get a lot of support for. For example, I theoretically could be the Mayor of my town. However, I don’t know much about the job, don’t have a political background, don’t have funding, and really don’t have a large constituent base. This doesn’t mean that I couldn’t do it but simply that the object is larger than my threshold so to even attempt such a large undertaking I’d need to drop the value of all other objects. 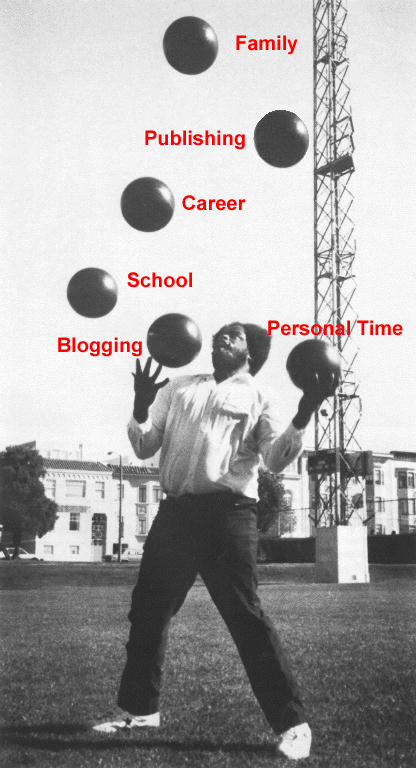 I have taken the time to value my objects, though I have never actually assigned them numbers. For example, my “Family” object is the biggest, followed by career, and so forth. Understanding the ordering of your objects is the first step to being able to juggle well. The main reason for this is that as some objects grow and others shrink you will inevitably find yourself with a need to drop some things off. Without understanding the importance hierarchy, how would you know what to drop?

So, if you want to excel at anything in life, learn to juggle.

CRAPTCHA
I had given up…